Please find below the newsletters for this year:

Year 4 trip to see the BFG

On Friday 22nd July 2016, Year 4 went to see the BFG before its general release time. The children were very excited! 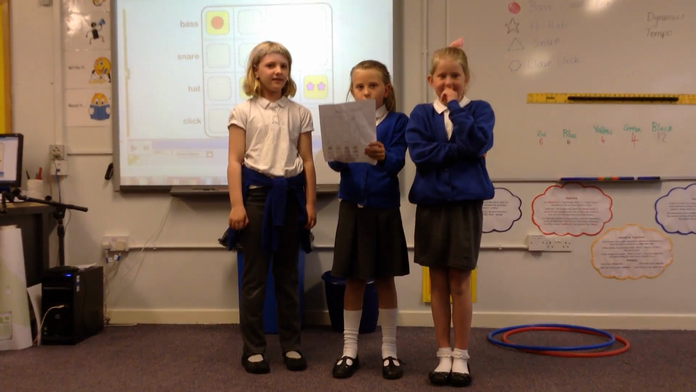 Check out our beat boxing compositions...

Looking at character thoughts and feelings

See our work on freeze framing based on Little Red by Lynn Roberts. 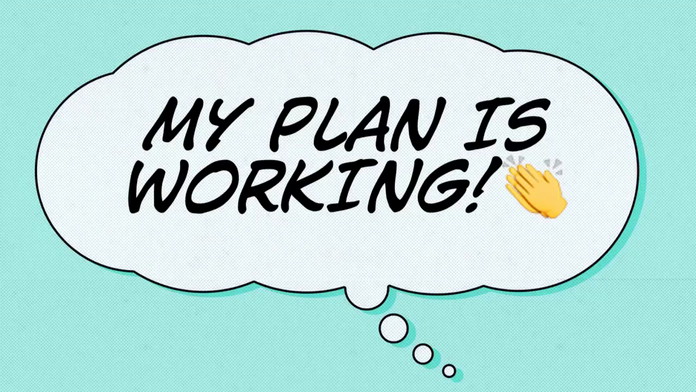 On the morning of Wednesday 23rd March, Year 4 had a visit from Debbie Green from NISCU. She explained to the children the importance of Easter to Christians and how the Easter Story is relevant to Christians in modern times. 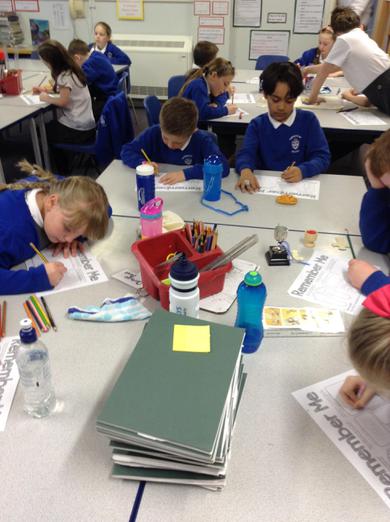 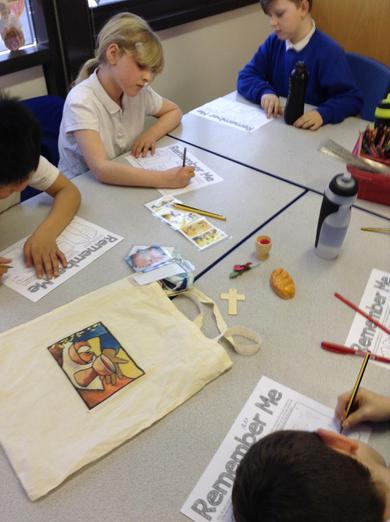 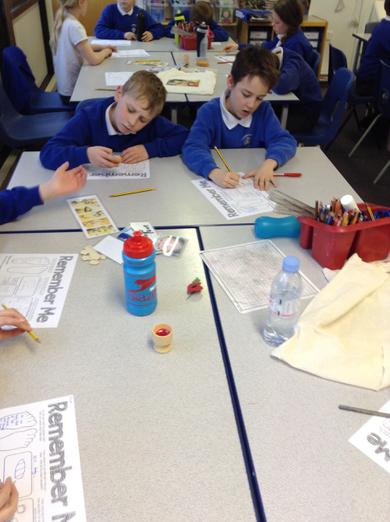 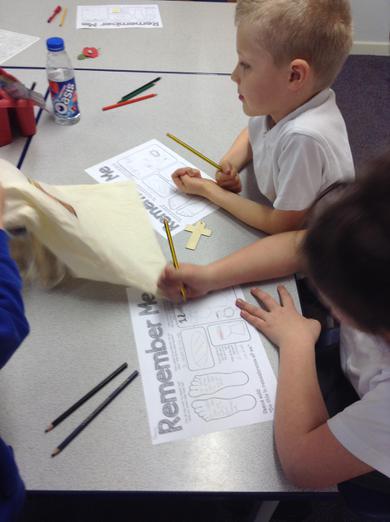 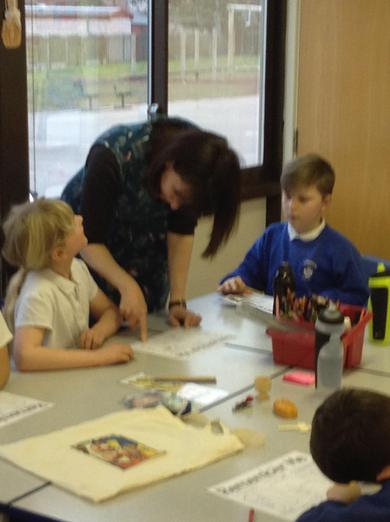 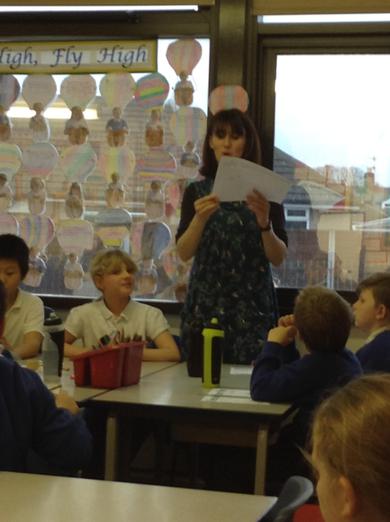 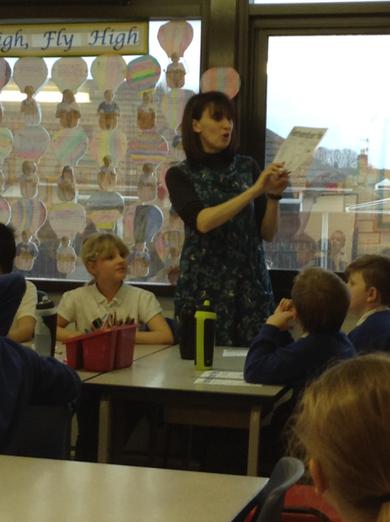 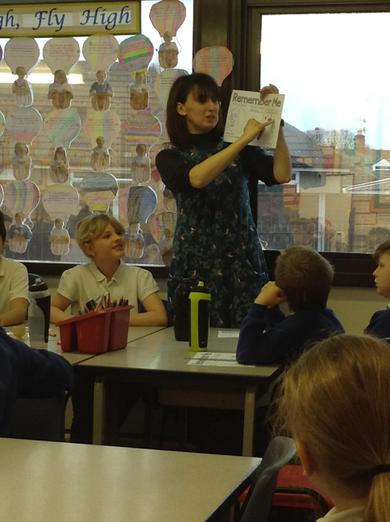 The children in Year 4 decided to run a total distance of 130 miles for Sport Relief. Each child and adult would run a distance of 2 miles - which would be split throughout the day.

Luckily, the weather was fine and not too hot. We started the day by measuring the perimeter of the course and calculating how many laps we would each have to run in order to cover the distance.

Taking the advantage of the nice weather, we decided to go outside to make a Human Carroll Diagram. The children were each given a shape and had to decide where to stand in order to sort the shapes.

A member of Year 4 with her Neolithic arrow head!

On Friday 11th March 2016, Year 4 went on a trip to Ingleborough Cave near Clapham. We went to look at cave features which we have been studying and to see how water has shaped the landscape.

The journey to Clapham took about an hour. Once in the car park, we were met by one of the tour guides. We walked the 2km up the track to the cave entrance.

Here we had an early lunch and undertook some field-sketching.

It was then our turn to enter the cave.

We saw all of the features which we had been studying- flowstone, stalactites, stalagmites and columns. We also learned that certain features had specific names such as - The Sword of Damocles. We had to avoid being dripped-on by the Witch's Fingers!

The class realised what total darkness was when our tour guide, John, turned out the lights for a few seconds- you could not even see the hand in front of your face!

An enjoyable day was had by all.

On Friday 4th March, we invited parents into class to play the board games which we had made over the last week. This activity finished our topic of Electrifying. 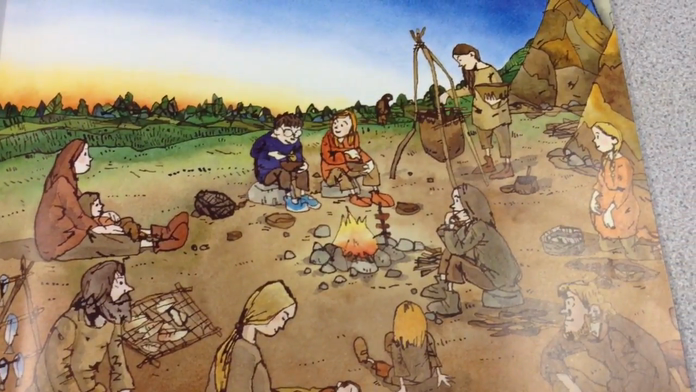 We used the book Stone Age Boy by Satoshi Kitamura and interpreted the pictures by adding sounds.

On Thursday 25th February, 2016, 4H went to Morecambe High School to use their facilities in order to further our knowledge of electricity and electrical circuits.

We left school at 2:15pm and walked to the high school. Here we were met by Dr. David Heath who took us up to the Science Department. Having been introduced to the Year 7 Science Club - many of whom were ex-Torrisholme pupils, we participated in a variety of exciting experiments.

An exciting afternoon was had by all and thank-you to the staff and pupils at Morecambe High School for making this a memorable trip.

We found out about Ancient Mayan chocolate.Cocoa beans were more valuable than gold! They used to drink ground cocoa beans mixed with spices.We mixed cocoa powder with chili and cinnamon.We added hot milk and tasted it, it was very bitter! The Spanish took cocoa beans back to Europe in the 16 th century and later on added milk and sugar to make the drink we know today. After tasting it we followed the Spanish idea and added some sugar!

We tried this hand clapping rhyme in Spanish.

I hope everyone had a great Christmas break and are all raring to begin 2016. We have some exciting experiences for the children to undertake. We are about to be electrified with our topic of, 'Electrifying'. The children will be looking at how electricity is generated and will be experimenting with circuits. We have already had a visitor in to talk to the children and have planned a trip to Heysham Power Station for the end of January.

On Tuesday 26th January 2016, 4H went on a trip to Heysham Power Station. The purpose of this visit was to investigate how electricity is generated.

We arrived at the power station at about 10a.m. and went into the visitor centre. The children undertook a number of activities in this location such as; quizzes, learning how the power station generates electricity, making posters about electrical safety and investigating electrical circuits.

After an early lunch, the children were ready for the tour of the site. All children were given security passes and personal protective equipment. They also had to be checked by security personnel.

We were then ready to enter the power station!

Having been split into three groups, we walked onto a rather windy and wet site. The children went into the turbine hall and saw how enormous this part of the power station actually is. They also saw the control centre with its rather old-fashioned computers.

We left the power station about 2p.m. still impressed by the sheer scale of it.

A huge thank - you to Mr. Whyte from Northwest Electricity for coming in yesterday, Tuesday 5th January 2016, to give the children an overview about how electricity works and is generated. As he was heavily involved in the repairing of the sub-stations after the flooding in December 2015, we managed to find out, from first-hand, what actually happened in the main sub-station on Caton Road.

The children also found out how difficult it was to generate electricity with some children trying to make fans and bulbs light by using pedal power!

On Friday 25th September 2015, Year 4 went on a school trip to Samlesbury Hall near Preston. We undertook this trip in order to understand what life would have been like in Tudor Times in such a place.

Excitedly, the children left school at around 9:15 a.m. and we arrived at our destination just after 10a.m.

After alighting the coaches and rounding the corner, the whole of Samlesbury Hall was revealed to many calls of 'Wow' from the children.

We were greeted by the owner of the house - Mistress Marjorie - and also by King Henry VIII!

After introductions were made, the children learned about the history of the house and some very interesting ideas about Tudor personal hygiene. We also learned where the family hid the priests during the time of King Henry's arguments with the Catholic Church.

After lunch, we went to the shop. Having spent all of our money, we then learned about King Henry VIII from the King himself!

It was time to go all too soon and a great day was had by all.

I trust that you all had a great Summer Break and are ready to begin Year 4.

I am Mr. Harding and will be your teacher for this year. I have been at Torrisholme School for a long time - since 1997!-  and have seen many changes. This will be my fifth year teaching Year 4. Other adults in the class, to help us, will be Miss Thomas and Mrs. Shaw. We hope that we have planned an exciting and educational curriculum for you to enjoy.