To finish off our topic on The Great Outdoors, Year 4 constructed a number of free-standing shelters.

On Monday 3rd July 2017, 4H visited the Abbeystead Estate to see how an area of land is managed and to investigate different habitats.

We left school at around 9:15 and arrived at Over Wyresdale Village Hall at 10 o'clock. Here we were met by two of the estate workers Helen and Rob.

After a brief talk about the history and ownership of the estate, we walked up to Lower Lee. On walking back, Rob talked about the animals, birds and plants that could be found on the estate and how these are managed.

We learned many fascinating facts about the uses of different plants and the children enjoyed stripping the stems of rushes!

After a quick lunch back at the village hall, we walked up to the woodsheds to see what happened to the hard and soft wood that the estate produced.

A short while later, we walked down the track to the reservoir which was the largest in the world at the time of its construction!

On arrival back at the village hall, Rob demonstrated how the radio collars operated on the ground-nesting birds on the estate.

At 2pm we left for school.

On the afternoon of Thursday 25th May 2017, we invited parents to come and view our movies and trailers that we have been making over the last week. The children had used a number of techniques to film these movies using the ipads and the editing programme iMovie. We enjoyed watching the results.

Investigating how sound is made

In music, we have been learning how to write the names of the treble clef notes on the stave. We even had a go at playing Treble Clef Twister!

As part of our topic, 'Lights, Camera, Action!', we have been investigating how light travels and the factors that affect the formation of shadows.

On Friday 31st March, parents came in to sample some Stone-Age Stew and help the children construct a replica of Stonehenge.

On Friday 10th March 2017, Year 4 went to Ingleborough Cave near Clapham to see how these caves are formed and how water shapes the landscape.

We walked up to the caves in misty rain and after some field-sketching entered the cave. We have been studying the features in class and it was nice to actually experience what it was like in a cave.

Experiment to show how the human digestive system works

We had lots of fun this afternoon exploring how the human digestive system works.

We have been looking at a story called Stone Age Boy by Satoshi Kitamura. The children have been thinking about the sights and sounds that the boy may have experienced. 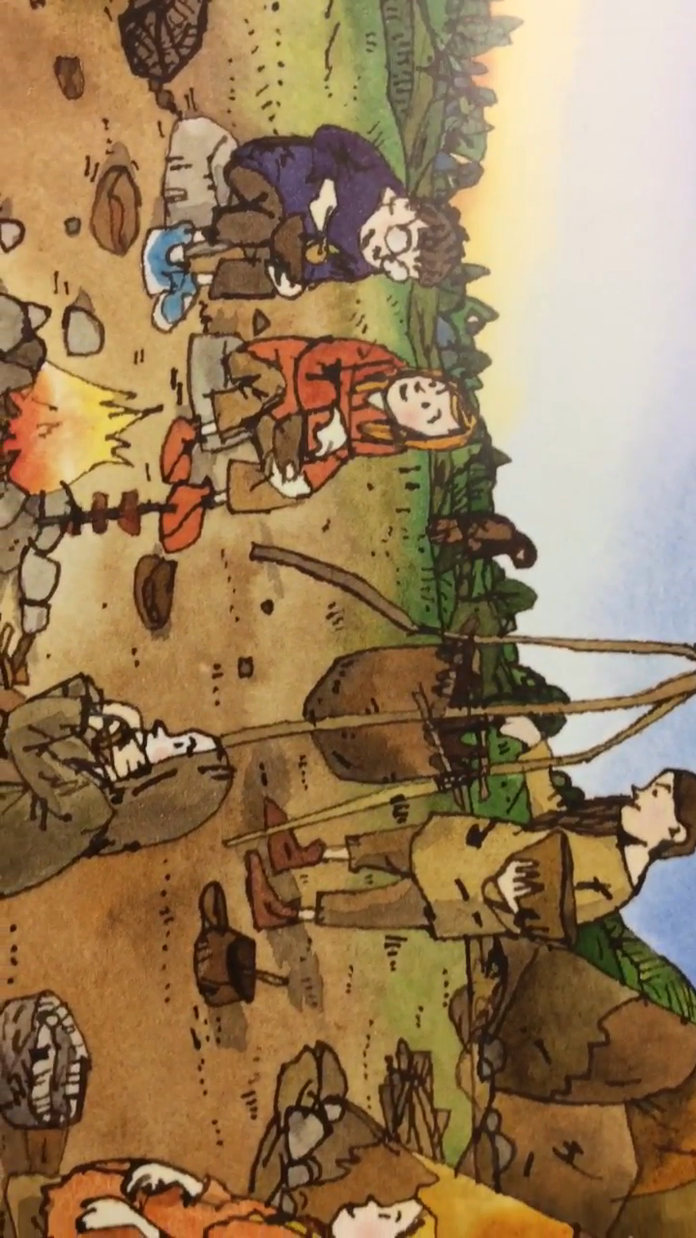 Our week continued with a visit to Skerton St. Luke's C of E Primary School on the afternoon of Tuesday 21st February 2017. Here we again teamed up with their Year 4s and learned about what the Romans did for entertainment. We ended up performing a number of gladiatorial battles in their school hall.

Our week began with a visit from the History Man on Monday 20th February 2017. We undertook this day in the Scout HQ of 16th Morecambe and Heysham Scout Group. As well as Year 4 from Torrisholme, we hosted the Year 4s from Skerton St. Luke's C of E school.

A great day was had by all!!

On the afternoon of Friday 10th February 2017, we played our electronic board games with our parents.

We've been having great fun in music, learning about rock music and singing Bon Jovi - 'Livin' on a Prayer'. 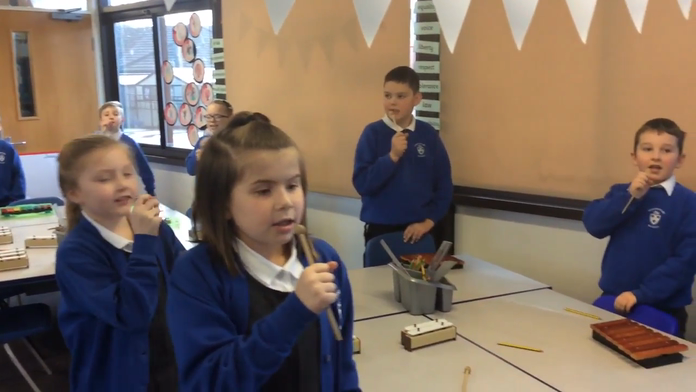 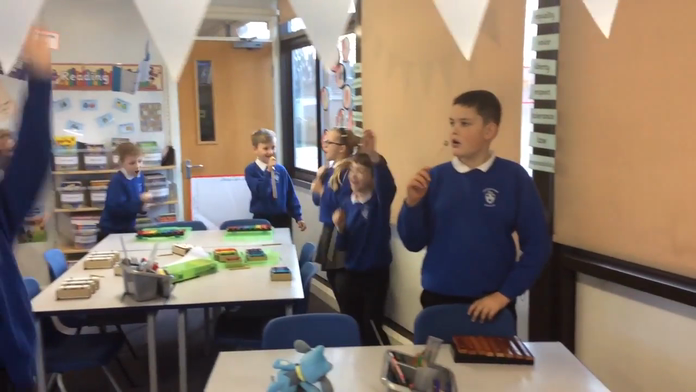 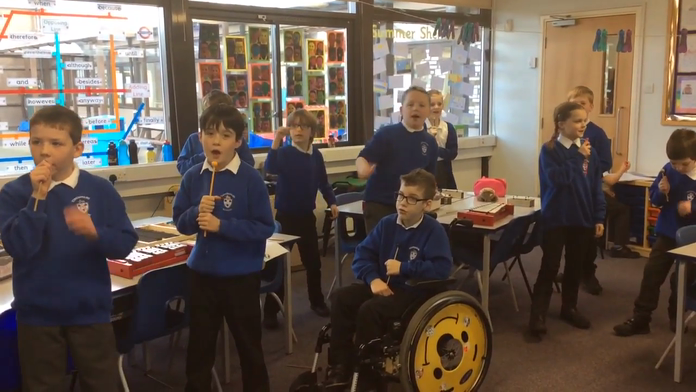 We also learned how to play a tuned accompaniment. 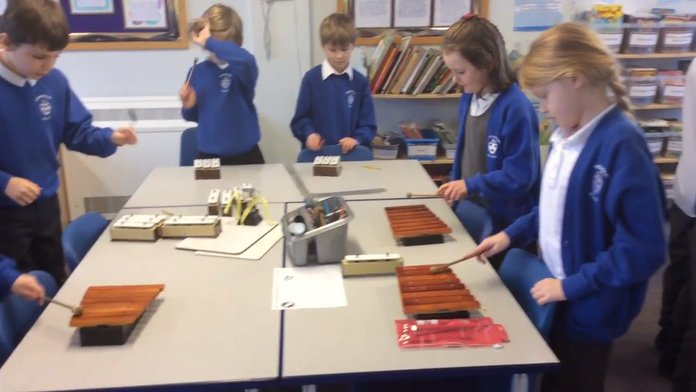 We took advantage of the fine weather and investigated how shapes could be translated to another position.

Trip to Manchester Museum of Science and Industry

On Wednesday 1st February 2017, Year 4 went on a trip to MOSI to further investigate how electricity is produced and how circuits work. The children's favourite part was watching their teachers being hooked up to a dynamo in Circuit City!

To understand that as the denominator increases the amount becomes smaller, we undertook an activity involving the sharing of chocolate bars. On each of three tables there were varying amounts of chocolate. The chocolate was to be shared equally between the number of children sitting around the table. The children positioned themselves at each of the tables one at a time and had to chose where to sit in order to maximise their share of the chocolate.

On Wednesday 11th January 2017, Mr. Whyte, an electrical engineer from North West Electricity, came in to talk to the Year 4 children. He covered a variety of topics such as: how electricity is generated, what is electricity, electrical safety, conductors and insulators and we even had the opportunity to generate our own electricity!

The children thoroughly enjoyed the experience.

On Thursday 15th December 2016, Year 4 went to Samlesbury Hall to experience what life may have been like for Tudor people.

We left school at around 9:15a.m. and, after a rather uneventful journey, arrived at Samlesbury Hall at 10:05a.m. The children were amazed when they saw the hall.

We met our tour guides for the day - King Henry VIII and Lady Marjorie Southwell. These guides could have really been Tudor people as they were extremely convincing. The children learned many facts about how the Tudors lived.

Re-enacting the Battle of Bosworth

On 22nd August, 1485, a battle took place that changed the course of British history and created a new dynasty- The Tudors.

The children played various parts of the individuals who had an impact on this battle.

The Battle of Bosworth

On the week beginning Monday 7th November 2016, we embarked on a week of cultural diversity throughout the school with the children visiting a number of different countries.

On Monday, we looked at the idea of 'Britishness' and British Values.

On Tuesday through to Thursday, the children were placed into mixed aged groups and travelled around the school visiting the different countries.

In Year 4 we looked at the idea of piñata. We researched where this idea came from and how it became the celebration in Mexico as it is today. We also learned the piñata song in Spanish!! Making the piñatas was great fun and the classroom had a fiesta feel to it.

On the Friday, we looked at Mexico in greater depth. The children located this country on a world map and looked at the features of the country and how it compares to our location. We then tried some traditional Mexican food by the construction and eating of burritos. Most children tried these though some were a little unsure of the re-fried bean element of the dish. Next, we looked at the festival of The Day of the Dead and how people in Mexico view the idea of remembering dead loved ones as a time of celebration. Finally, we looked at the idea of stereotypes by watching an old clip of the Looney Tunes character - Speedy Gonzalez - to spot the stereotypes. We found loads!!

Making products to cool you down

On Friday 21st October, Year 4 designed and made products that would cool you down.

We first looked at existing products that performed this task and identified the positive and negative points of these products.

After this, we designed and made our own products with the skills focus of measuring and cutting accurately, sawing, drilling and joining materials in a variety of ways.

Lots of fun was had during our day to kick-off our new topic, Japan.

The children experienced some Taiko- style drumming, an introduction to Manga-style art, painting pebbles for our Zen Gardens and Japanese fan dancing. 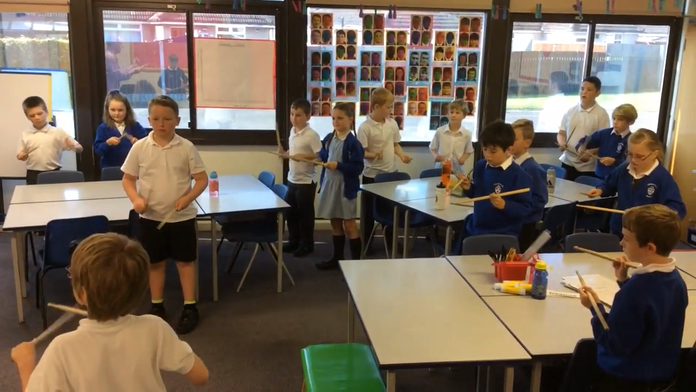 I hope that you all had a great Summer Break and are ready and refreshed to experience some exciting learning opportunities.

Staff for this year will be myself (Mr. Harding), Mrs. Turnbull and Mrs. Shaw.