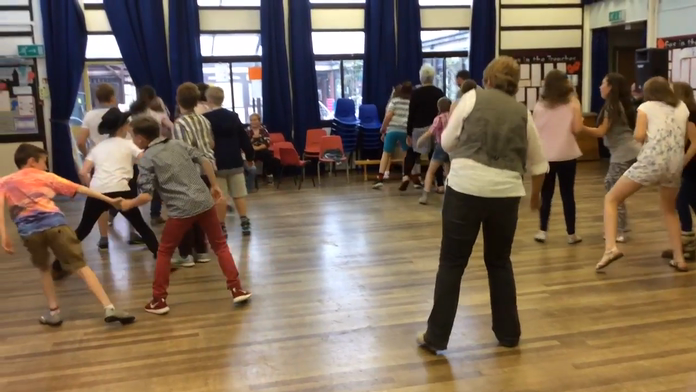 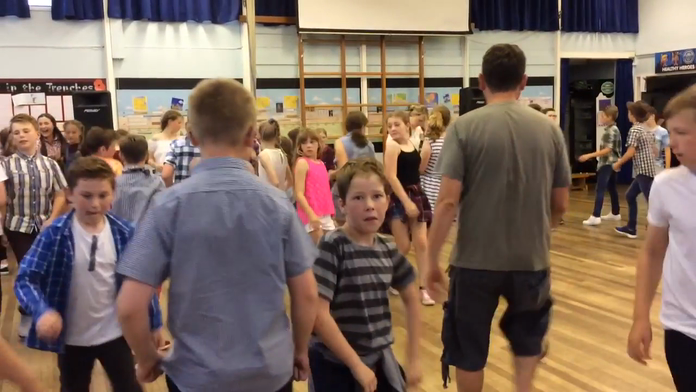 Take your partner by the hand...

On Friday 10th July, we got the coach to Half Moon Bay to explore coastal erosion as part of our topic about Coasts. The weather was favourable as we arrived. As we explored the rocky cliffs at Half Moon Bay, we discovered some amazing rock formations. We found the cliff sides were sandy and broke away easily. We noticed large rocks which had once been part of the cliff. We also discovered thin seams of slate in between the layers of sandstone. It was easy to see where the tide comes up to and there were a variety of plants growing in cracks and across the top of the cliffs. Parts of the cliff rocks contained large cracks and they looked unstable.

Getting ready to explore our coastline at Heysham.
This environment has changed greatly!
Exploring the different types of rock.
Climbing the limestone rocks.
Rock pools amongst the high limestone rocks.

After exploring the cliffs we walked over the Barrows, past St Peter's Church and down to the rock pools. In groups of three or four, we set off to explore the sea life. We were able to find a great variety of living creatures and plants, including enormous crabs, anemones, sea snails, shrimps and jelly fish. We also discovered a large amount of broken pottery and were able to collect over 30 different varieties of broken pieces of plate! We collected our creatures in trays and examined them with magnifiers. Before leaving for our lunch, we placed them carefully back into the rock pools.
Exploring the beach for sea life.
What a whopper!
We found plenty of crab shells.
Enjoying our lunch in the sunshine.

Our 'Great Outdoors' adventure to the beach!

Today, Year 3 and Year 6 had a fantastic trip to Morecambe beach. We set off from school at about 9:45 am and walked, via Happy Mount Park, along the prom to the beach. It was a VERY long way but we didn't mind at all as the weather was beautiful and we had a good chat with our friends.

Getting ready to go to the beach!!!

Walking along the prom to the beach.

Our kites were made from a plastic bin liner and two pieces of doweling. We decorated them with coloured stickers. They flew brilliantly!

Art on the Street

Follow the links below to see our work with Y6 this week!

See class 6J for films of us performing our rap music

ART ON THE STREET

In the final week before half-term, Year 5 and 6 have joined together and are participating in activities linked to 'street art'. This includes rapping and beat-boxing, street-dance and art.

In 6J, the children have been altering a rapping song by Will Smith  called 'The Prince of Bel-Air'. We have used the original backing track, but added our own lyrics linked to Morecambe. We have practised our 'beat-boxing' skills and learned a groovy accompaniment to go along with the song.

Having a go at beat- boxing!

This group are awesome!

Check out the groovy moves with today's version of the 'Morecambe Rap'!

When we had practised all the different parts: the instrumentation, beat boxing and rap words, we put it together to make a grand performance.

We listened to a tutorial from an expert beat-boxer and then had a go ourselves. Luke and Adam will be future stars!

A huge well done to year 6 who recently took part in their own political campaign. The children worked really well collaboratively to put together policies for our school, the local area and our country. Congratulations to the Hyper Vipers who received the most votes and will join the School Council until the end of term.

On Thursday, we held a Shakespeare Festival, which lots of parents and grandparents attended.

Check out the films below of us dancing and teaching our parents to dance!!

If you'd like to see our Midsummer Night's Dream shadow puppet show, or our fabulous soliloquies, follow the link below to 6T's page.

The Dance of the Peas!!

This week we have been investigating the following:

In 6T we got into groups and set up an investigation to try and hit a target using a torch and mirrors. We had to position the mirrors really carefully in order for the light to travel from the torch to the target. Some groups were able to hit the target! We saw that light travels in straight lines.

The photos below show the finished results of our investigation:

As part of our Shakespeare topic, we have made some super-snazzy pencil toppers!

They were easy to make and we followed the instructions really well. The easiest bit was to stick the hair on and the eyes. The hardest part was cutting out the  moustache and goatee beard. It was really fiddly but the results were amazing!

To round off a very busy half term, Mrs Green organised an Easter egg hunt. It was really great fun!

Wear your medal with pride!

Thomas brought in his great-grandad's war medal from WW2 to show the class.
To read more about the interesting life of Thomas's great-grandad and how he won his medal, click on the following link:

Here we are all ready for the sola eclipse! But where, oh where is the sun?
How cool are we?
The excitement is building......
Can anybody see the sun?

For Red-Nose Day, this year, we were able to wear our own clothes and come with a 'funny face'!

Some children in 6J bought red-noses, some had a little bit of make-up on and some went completely MAD!

Take a peek at some of our funny faces on this special day!

As part of our topic 'Treading the Boards' about the life of William Shakespeare.

This dance translates as 'The dance of the peas!'

On 2nd March 2015, Year 6 performed in their first ever Young Voices Concert at the Manchester Arena. We left school at 11:30 (after eating our lunch!) and arrived in Manchester at 1:00p.m. We had a long walk into the arena and we found the block where we would be singing. We were very excited as we entered the arena and found our seats.

There were over 7000 children singing in the arena and at times it was very noisy! We had a run through of the songs with the conductor and the band.

Here are some photos of our afternoon at the arena:

Block 116 on the top rows - it was high!
MiC-Lowry practise their songs and we join in.
Look at our fantastic banner!

After a long practise, we had our packed tea - we were really hungry by then! Then we watched some of the singers, bands and dancers practise their numbers. They were awesome!

The audience were in and ready; the lights went out!

Here are some more highlights from the concert:

Singing 'Whistle Down the Wind.'

Enjoy our slides how of pictures from the event!

Finally, here are some of our thoughts about this wonderful experience:

Treeee-mendous triangles!
Our work on WW1.
Stories from the trenches.
Are you in trouble? Who are you going to call?
Up,up,up and away!

Our assembly told how the Romans finally came to settle in Britannia.

We acted out a short, humorous play describing the events of AD43.

In Scene 1, Emperor Claudius was informed by his men that he was a great leader, but how could he let people know? Minimus informed him that he still needed to conquer a small island, Britannia, and that would make him great. Claudius ordered his general Attackus to get his troops ready.

Minimum tells Claudius about Britannia.
Attackus gives his instructions.
The soldiers line up ready.
'Tortoise formation.'
They are magnificent!

In Scene 2, Attackus has train his army and they are not very enthusiastic about going to Britannia!

They practise different formations of attack. Finally, Attackus thinks they are ready for battle.

In Scene 3, the Celts are enjoying peace. Some Celts are sunbathing on the beach when the Roman attackers arrive. At first they think it is the Gauls, visiting from France, but then they realise they are under attack! They rush back to their camps to warn they tribe leader and get ready for battle.
just an ordinary day out to the seaside.
Edna informs the Celt tribe of the attack.
The soldiers are coming!
The Roman army are victorious. The Celts limp back to their camp and accept that the Romans are here to stay. They decide to get along at the end.
The Celts decide to accept the Romans.
Their leaders meet to discuss peace.
Celts and Romans shake hands.

Nootball- a new and exciting game in Year 6!

Mrs Thomas is AMAZING! She has invented a new game for us to play in outdoor games: NOOTBALL!

It is what it says on the tin!

A mixture of  FOOTBALL and NETBALL!

" Nootball is great exercise, fun to play and an amazing team-building game!"

" We LOVE playing Nootball because it is fun and a great way to work as a team. It is a great opportunity to get involved in two sports at once! We LOVE it and so will you!"

"It is basically the same as football, except that you use your hands. The best part was scoring.

Why not try it out in the playground?"

"We would like to play it again. The best bit was scoring. If you don't want to play, you can get to be a ref and be in charge of the whistle! Mrs Thomas, who invented this games, likes to play it too!"

"Nootball, which is a combination of football and netball, is a very enjoyable sport liked by many. Starting recently, we are enjoying it lots!"

"Nootball is a wonderful invention from Mrs Thomas. It is an extremely fun game where you pass like in netball, but with football posts. It is AWESOME!"

"Mrs Thomas, who is a genius, has invented a new game called Nootball. Working as a team, you have to throw the ball (like netball) and shoot into football nets (like football).

We have been learning how to describe our appearance in Spanish. Watch the clips below to see how much you can understand!

Go to the  Year 6 section of the Spanish webpage to play games and practise your Spanish descriptions.

Abigail helps María the puppet describe her appearance in Spanish!

Sarah helps Marta the puppet describe her appearance in Spanish !

Sam helps Martín the puppet describe his appearance in Spanish!

We have been investigating forces in Science this week and testing Aristotle's theory on gravity.

Aristotle stated that two objects of different masses, when dropped from the same height, will fall at different rates.  If one of the objects is ten times heavier than the other, it will fall ten times faster.  We devised a simple investigation to test this.

This week, Year 6 have created their own company 'Creative Candles'. At Friday's Christmas Fair, they will be selling a range of beautifully decorated candle holders, snow globes and sweetie jars, all the perfect accessory to decorate your home or making the perfect Christmas gift. You can find their fabulous creations in 6T with prices starting from just 50p.

Year 6 children have shown their sensitivity and maturity today.  Not only did they prepare and lead a Remembrance Assembly for the juniors, but they also created an art installation to remember all those who have died in war.  Well done, everyone.

Please take a look at our poppies:

Pinning the poppies to the grass
Year 6 beside their artwork
Heartfelt messages
Why we commemorate this day
Our poppies' lives were fleeting... 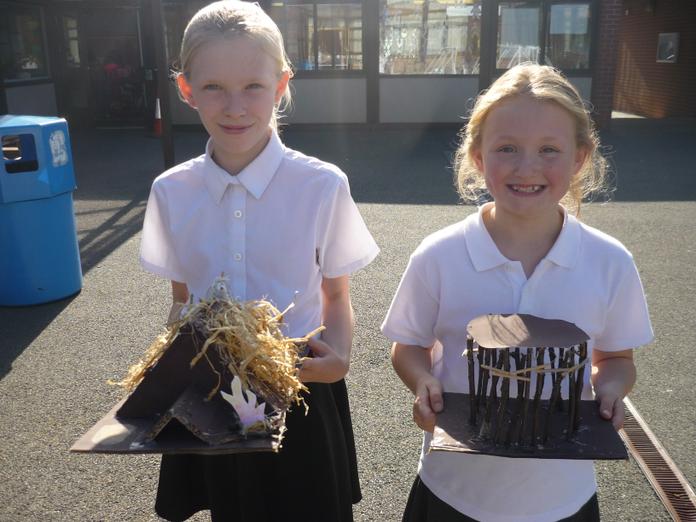 Have a look at our Stone Age dwellings - we had great fun making them!