On 29th June 1613, London's Globe Theatre went up in flames during a performance of Shakespeare's Henry VIII. A theatrical cannon, set off during the performance, misfired, igniting the wooden beams and thatching. According to one of the few surviving sources that documented the event, no one was hurt except one man whose breeches (short trousers) caught fire and the flames were put out with a bottle of ale - phew! The theatre was rebuilt in the following year. 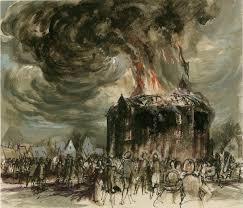