Year 2B sing the vowel song A E I O U in Spanish . 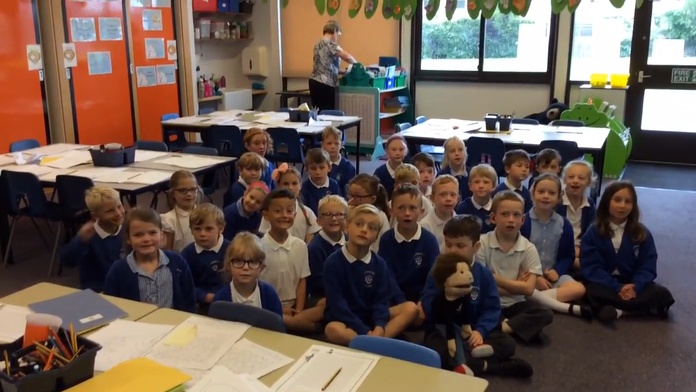 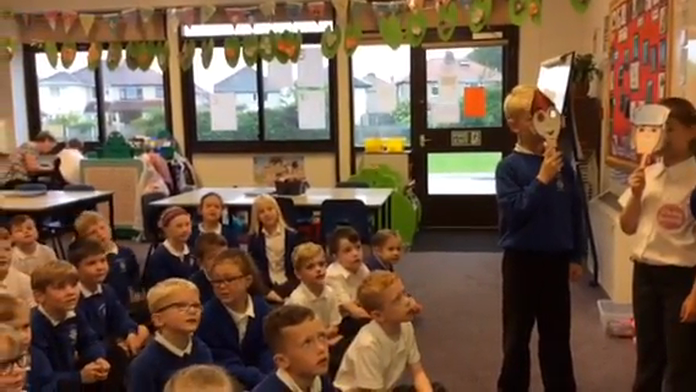 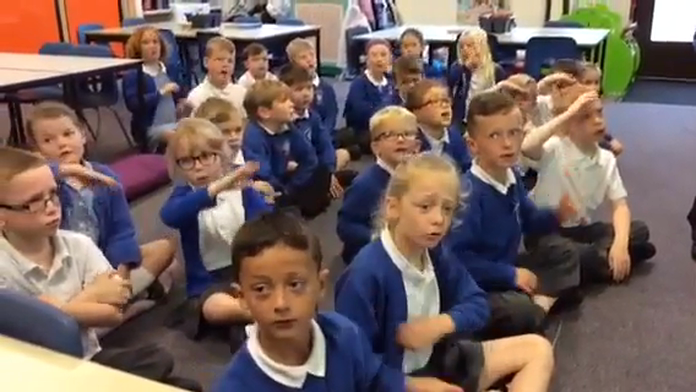 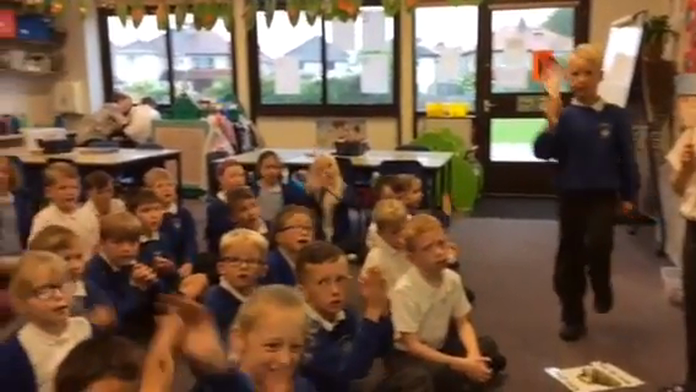 Year 6 have been learning about food in Spanish and how to say if they like it or not. We are planning to have a Spanish café at the end of term.

Year five worked really hard on their pronunciation and intonation in Spanish for these performances. Some children even managed to memorise their lines in Spanish. ¡Estupendo! 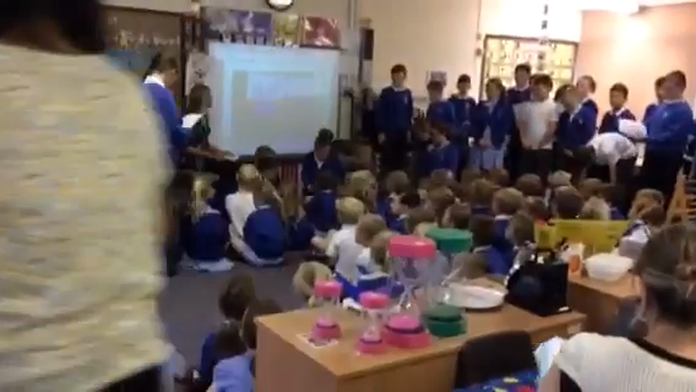 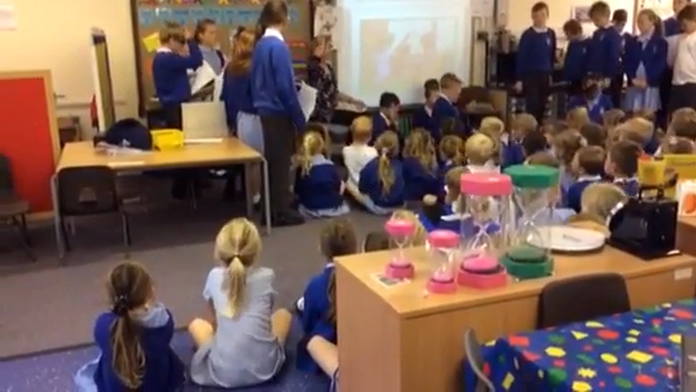 Year 2 Jack and the Beanstalk

Year Two can read and understand this whole story in Spanish! ¡Fantástico!

This story and the images are from the Grow Story Grow website.See growstorygrow.com for more details.This performance ended a half term of work on this story.We started by learning some key words then built them into sentences. We also had fun playing the giant game outside.

How to play Jack and the Giant game.

One person is chosen to be El Ogro. They shout the instructions from the front.

¡Trepa! -Mime climbing up the beanstalk.

¡Desciende!- climb down  the beanstalk.

¡El Ogro! - when the person who is on shouts this everyone else shouts ¡Socorro!

The ogre then tries to catch someone.

¡Socorro! -mime help and run away.

The person who is caught is the next ogre.

Abuelito,abuelito ¿Qué hora es? Year 6 learned to play this game and how to say the phrases really well in Spanish. Well done!

Class RB can join in with the song Incy Wincy Spider in Spanish.

In Reception we are learning Incy Wincy Spider in Spanish!

Year 1 are enjoying learning this song and the actions to go with it!

This is a super simple song about Pirates in Spanish.

Year1B can join in with the pirata song!

This half term we are learning some words for toys we play with on the beach.

We are reading a big book about the beach (la Playa ).

We read some sentences in Spanish. 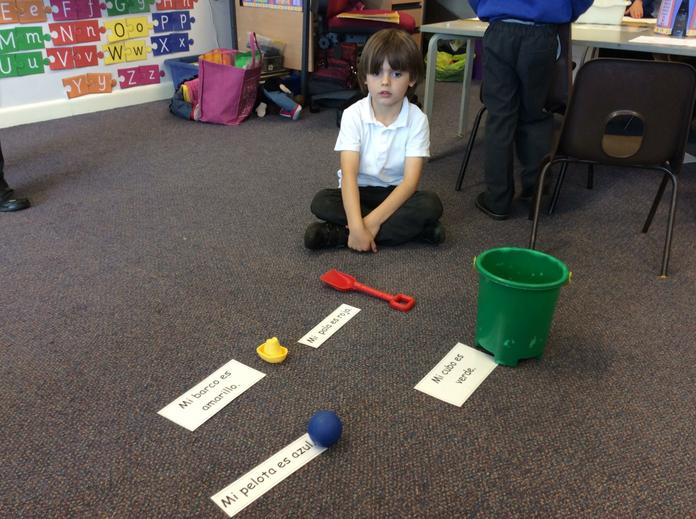 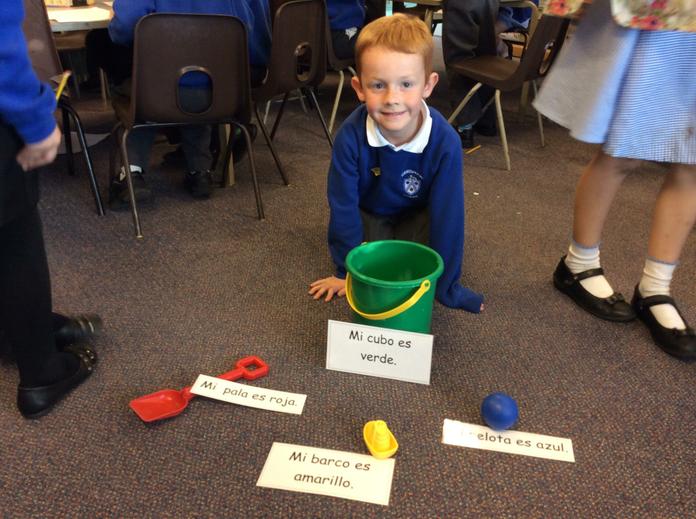 Look at our super writing in Spanish!

This is our favourite song in year 1 ! This song has no music but it is clear and slow and has subtitles in Spanish. ( Capital letters only)

We are reading Jack and the Beanstalk in Spanish! 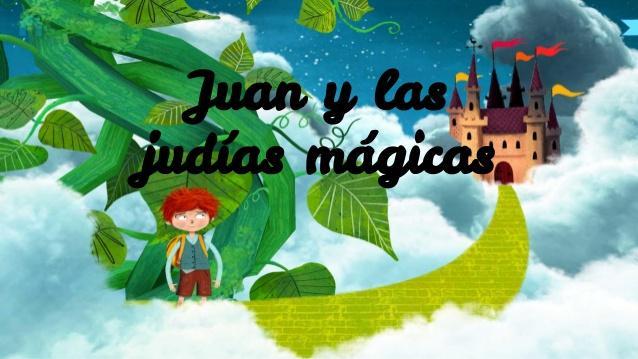 We have learned how to say the colours in Spanish.

Have a look at this web page.

Listen to 3w sing a colour song in Spanish.

3w made up their own verses using more colours.Can you hear what they are?

Year 4 will be learning how to say what pets they have in  Spanish.

Year 4 are learning the numbers up to 2015 this half term. We will also be looking at a  Tudor time line in Spanish. There were some important Spanish Tudors. Do you know who was Spanish? ( Clue :Henry VIII 's first wife?)

4H worked as a team to find the dates in Spanish Tudor history.

Year 4D counting in hundreds upto a thousand in Spanish.

Year 4 learned a clapping game for counting up to a thousand in Spanish.

Practise your numbers over 100 in Spanish.
NOTE This teacher uses the Latin american pronunciation of ci so it doesn't sound like "th" here it sounds like "s". Can you hear the difference?

Lyrics for Me Gusta Contar Song.

Have you seen the chocolate recipes we did last term? They are on Year 5G and 5s class pages. Have a look!

This half term Year 5 will be performing the story of the 3 little pigs in Spanish -Los Tres Cerditos. We will be working on our presentation skills and reading a script in Spanish. 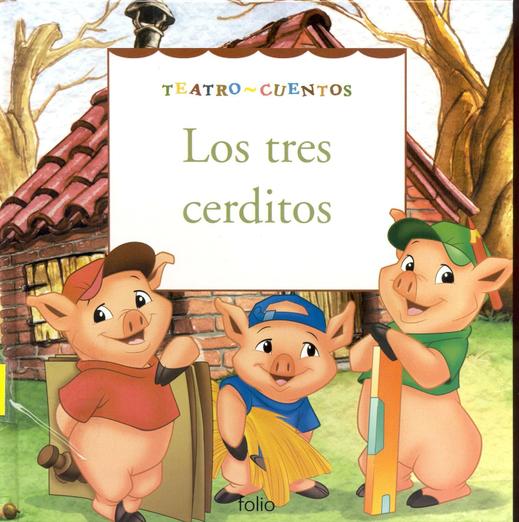 We are putting all the Spanish we have learned together to make some colourful monsters in Spanish.

This means making sentences with the correct word order!

Adjectives usually come after the noun in Spanish.

We will be using plurals and adjectives of colour to correctly describe nouns ( parts of the body)in Spanish.That's quite a challenge!

The first week back in Spanish classes we learned how people celebrate New Year in Spain. In Year 1 and Year 3 we practised eating 12 grapes to the chimes of midnight. If you can eat all 12 grapes (  las doce uvas ) then you have good luck all year! Can you count to 12 in Spanish? 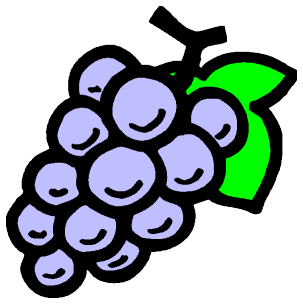 In Year 5 we have been reading a recipe for a Roscón. This is a cake that is eaten on January 6th, El Dia de Los Reyes. There is a figure hidden in the cake and if you find it in your piece you are King or Queen for the day!  Year 5 have been super Spanish detectives and have used bilingual dictionaries to read and understand the recipe.

The best part of the lesson was eating the cake! 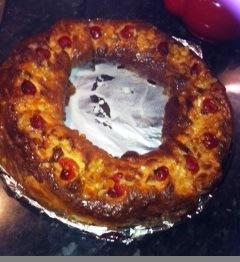 You know it in English.Now learn it in Spanish!

Year 2 listened to this song then played a snowman game in Spanish!

In Reception we are learning a song to say what our name is in Spanish. 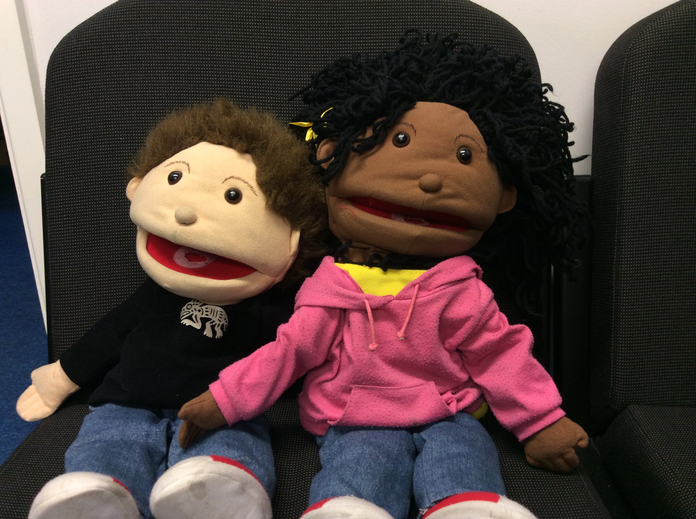 In Reception we have met the two Spanish puppets Carlos and Maria. We will be learning some greeting songs and how to say our name in Spanish.

This term in Year 1 we are learning some Spanish games and rhymes. We are having fun learning to count 10 elephants on a spider's web! Listen to the song here.

We learned how to say the names of some toys in Spanish and played some fun card matching games.

In Year One we have been listening and joining in with stories and songs about Woodland animals.

Listen to a song about animals and how they move.

We are learning how to say what the weather is like in Year 2. Last week we needed to learn the word for snow and ice! Play the games on the bbc website to practise your weather phrases, or join in with year 5 singing the weather song!

In Year Two we have been learning how to ask and reply to the question have you got any pets.

Play the colour games on the links below!

This half term we will learn how to count to 12 and how to say how old we are.

We have learned some classroom instructions in Spanish.

Year 3 have learned to say how they are feeling in Spanish.

Year 3 have just started learning Spanish! They have been learning how to greet each other in Spanish and how to say their ​name.​

¿Cómo te llamas? -What is your name?

We will be learning how to introduce and talk about our family in this half term. We learned a finger rhyme about the family. Have a look at 4D's web page to listen to them say the rhyme!

Around the World in Spanish!

Do you know how many countries speak Spanish?

Spanish Around The World.

http://www.educacion.gob.es/dms-static/3e26633e-6504-4812-90d2-4081b2d59aee/consejerias-exteriores/reino-unido/carteles/cartelpizarra.jpg
Year 4D and 4H have written their own versions of the Veo a un animal song based on animals they have been studying for their habitats topic.They used Spanish dictionaries to find some adjectives to describe the animals. Have a look, can you guess which animals they are?

Year 4 have been working on a song about animals and where they live. First we listened to hear what animals and habitats were in the song. Then we made sentences to say where each animal lives. We have now started looking at the adjectives used to describe each animal.

Listen to Year 4D singing the song Veo a un Animal on their web page!

In Year 4 we can ask and reply to this question.

Where do you live?

Listen to our dialogue in Spanish on 4D’s page.

We will be looking at recipes this half term. See the top of the page for a photo of the Roscón we tasted. We will be revising our bigger numbers so we can talk about our history topic, The Aztecs.We will also be learning how to make some delicious hot chocolate in Spanish! ¡Ñam Ñam !

Year 5 have worked really hard on expressing opinions in Spanish this term.Have a look at their super sentences about the seasons!

In Year 5 we are learning how to say what the weather is like . We are also going to talk about the four seasons of the year. We will be making some sentences about which is our favourite season and why.

We are learning to describe what we look like.

Have a  look at the picture dictionary below to answer the question.

Watch the clips of our super descriptions in Spanish on the Year 6 web pages!

We will be learning the parts of the body in Spanish.

Have a look at the picture dictionary then see if you can play the games!

Parts of The Body -A Picture Dictionary Parts of the Body from the Rockalingua Website.

We will be learned numbers to 31 and dates in Spanish. We researched important dates at Christmas in Spain. We read facts in Spanish and compared a Spanish Christmas to Christmas in the UK.See Euroclub Schools Christmas In Spain website at the top of this page.

Year 6 are learning how to have a short conversation in Spanish.They are learning some new ways to greet people and ask how they are feeling. ¿Qué tal?

Have a look at all the links for Year 3.

We will be talking about where we live and where we are from in Spanish.

Can you answer all the questions in the song below?